Cressall manufactures one of the widest ranges of electrical power resistors in the world for applications such as dynamic braking for industrial drives and the traction industry, neutral earthing for MV transformer and generator protection, as well as harmonic filters, motor starters and a range of portable load banks for on-site load testing

A BRIEF HISTORY OF CRESSALL 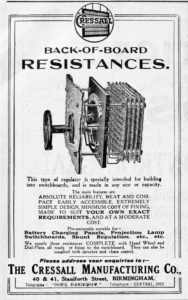 The company was started in 1912 by two Birmingham brothers, initially to manufacture the asbestos resistor nets until then only produced in Germany.

Over the next twenty years the Cressall brothers extended their resistor range to include porcelain and mica elements as well as sterilisers, water heaters and battery chargers.

From 1939 the company, a reserved establishment, made welding resistors, radio nets and degaussing equipment to protect shipping from mines.

A naval officer on a visit to the factory maintained that, for a time, the defence of Gibraltar had been entirely dependent on a piece of Cressall wiring.

During the fifties Cressall introduced wire wound rotary rheostats and vitreous enamel resistors. In 1955 they merged with rivals Expamet who had developed expanded metal resistors and the combined company now had Britain’s widest range of resistors.

In 1965 the company changed its name to Cressall Printed Circuits and diversified into medical magnetic screening, printed circuits and electronics with an American partner.

A much slimmed down Cressall was purchased by the Halma Group in 1990. Halma revived Cressall’s fortunes and in 1993 the company moved to Leicester. New products followed; neutral earthing resistors, portable load banks and standard dynamic braking resistors along with fresh investment in new machinery for mesh expanding, edge winding, wire coiling and a complete sheet metal fabrication plant.

Such was Cressall’s success that they quickly went on to acquire the GEC Rugby, H A Birch and Eaton Cutler-Hammer resistor businesses, extending still further their range of resistor technologies. Incorporating GEC’s edge wound coils and Cutler-Hammer’s traction resistor expertise meant Cressall became by far the most important power resistor manufacturer in the UK.

UP TO THE MINUTE

In 2006 Telema SpA purchased a thriving Cressall and since then Cressall has benefitted from being an important part of the world’s leading power resistor group. Benefits that we pass on to our customers. An example is the revolutionary EV2 braking resistor.

Developed by Cressall using new materials and new manufacturing processes, it has reduced the footprint and increased the capacity of dynamic braking resistors and, in the process, opened up new applications for the twenty-first century.